Vigor is Igor's twin brother and a new member of the Pound Puppies.

Like Igor, Vigor is a Transylvanian Hound. He wears reading glasses, a red vest, a green tie, and brown pants. He is sometimes seen carrying a book. After three years, Vigor wears a red jumpsuit, a green tie, and black socks with holes for his toes. He also grew tufts on his cheeks and sharp claws on his toes. Sometimes, he is seen without his socks on.

Vigor cares about his brother and his friends. Whenever people mispronounce his name as "Vig-gor", he tells them to pronunce his name "Vee-gor". Unlike Igor, Vigor is the most serious of the twins and doesn't like it when practical pranks were pulled on him. Vigor has a habit of pushing his glasses up if the glasses slip. He looks up to Howler as a mentor and often helps him with his inventions. Despite his age, Vigor is intelligent. He is easily annoyed by Dumbo's stupidity. Unlike Igor, Vigor doesn't hold a grudge against his father, but often comforts Igor when it comes to Igor's dark past. He dreams of becoming a doctor to help animals in need. Despite his intelligence, Vigor is kind-hearted and sympathetic. Vigor has a crush on Precious and is overprotective when it comes to her safety. He also cares about the environment and dislikes pollution. Vigor has sensitive ears and can't stand it when people sing off-key. Vigor likes to eat berries, but he despises fish. The reason why Vigor dislikes fish is because they leave a bad taste in his mouth. His dream is to be a biologist. Every time he makes an explanation about his inventions and future projects, he'll place a pair of glasses with spirals on the lens. He is good friends with Lucas, Cactus Flower and Kyle.

Like Howler, Vigor has the ability to invent machines, but for medical purposes. He's also a great pianist, but plays the keyboard. Vigor is a very good actor and also composes the music for the web videos he makes with Igor. And ever since, Vigor could put on a weird costume, like a mad scientist, a grandpa Pup, or anything comedic, just to cheer his friends up, even though his friends originally thought he had no sense of humor.

His full name is Vigor Strayvinski. Along with Igor, Vigor hails from Budapest, Hungary.

Vigor and his love interest, Precious

Vigor three years ago by CartoonLover 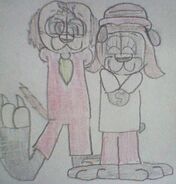 Add a photo to this gallery
Retrieved from "https://poundpuppies1986.fandom.com/wiki/Vigor?oldid=91435"
Community content is available under CC-BY-SA unless otherwise noted.