Nose Marie is a bloodhound / boxer with brown fur. In the first season of the TV series, she wears a purple dress and a black dog collar. She has a flower on her right ear and her hair consists of a brown, tiny strand. In the second season, she wore a purple dress with an apron, white cuffs on the sleeves, and a white dog collar. Her brown hair has grown. In Pound Puppies and the Legend of Big Paw, she wore a pink dress with an aqua-colored shirt collar and blue cuffs on the sleeves, a white dog collar, and two aqua-colored bows in her hair. She also had hazel eyelids. In the 1985 TV special, Nose Marie originally wore a light blue dress. All of her dog collars have a yellow tag.

In Season 1, Nose Marie is sometimes boastful and has a flirtatious personality with male dogs, especially her love interest Cooler, who she often calls "Cooler honey" or "Cooler dear". She also had good etiquette. She also has her moments of being self-centered and is often annoyed with Bright Eyes' cheerleading habit. Despite that, Nose Marie shows remorse for her friends. For example: In Bright Eyes, Come Home, when Bright Eyes left Holly's Puppy Pound, Nose Marie felt sad for her. Whenever she is running scared, she screams "Eek! Eek! I say, Eek!". In The Star Pup, it is revealed that Nose Marie wanted to be loved. She was disheartened to hear that she is going to leave her friends behind. Nose Marie gets mad when Cooler is with other girl dogs and is scared when he's in danger, showing how strong her feelings are for Cooler and that she doesn't want to lose him. In Season 2, Nose Marie has a loving and caring personality. She is also like a surrogate mother to Whopper, Bright Eyes, and other young puppies. She no longer hits on Cooler, but still calls him affectionate names. Nose Marie sometimes cries at adoptions. In Pound Puppies and the Legend of Big Paw, she keeps her personality from Season 1 of the TV series and is like Cooler's girlfriend. Whenever she is surprised or shocked, she says "Oh my southern fried goodness!". During the original TV Series and Pound Puppies and the Legend of Big Paw, she speaks in a Southern accent. In the TV Special, her friends call her "The Nose". She also has a nasally Brooklyn accent.

Cooler and Nose Marie's First Meeting<Episode 2: How to Found a Pound>

Nose Marie was chased by a couple of tough cats all the way to a bridge. Cooler saved Nose Marie from falling off the bridge and she fell in love. It was her who gave Cooler an idea that Millicent Trueblood should start a puppy pound when she said "You sent my heart a-pounding!", when it was also where Cooler and Nose Marie first kissed. She has since then became a member of the Pound Puppies.

During Season 2, Nose Marie is known for her cooking. In the TV Special and in Pound Puppies and the Legend of Big Paw, she also has a sensitive nose, which allows her to track a scent of someone she knows. Nose Marie can also sew, as she seen in The Fairy Dogmother sewing Holly's dress. She is also a good banjo player and has a beautiful singing voice. Nose Marie is ambidextrous like her friend Jackie, but she prefers to use her right hand.

Nose Marie is inspired by Scarlett O'Hara, a character played by Vivien O'Leigh in Gone with the Wind.

Nose Marie was originally known as "The Nose" in the 1985 TV Special, even though she was referred as Nose Marie in the coloring book story "Welcome the Newborns", which may have inspired her TV series name.

In the TV Special, Nose Marie has a record of 15 escapes.

Ruth Buzzi, who provided Nose Marie's voice in the TV Series and Pound Puppies and the Legend of Big Paw, was known for starring in the 1960's TV Series, Rowan & Martin's Laugh-In, as Maw in the 1994 film The Night Before Christmas, and the Opposing Coach in the 1976 film Freaky Friday.

Joanne Worley, who voiced Nose Marie in the TV special, is known for voicing the Wardrobe in Disney's Beauty and the Beast and was a panelist in the Davidson version of the Hollywood Squares.

Nose Marie was presumably born in the southern part of the United States, which explains her accent. 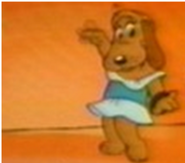 What some dogs will do to get adopted

"I'll teach her to move in on my Cooler."

"Hello, Holly's Puppy Pound. How can I help you?"

"What do you think, Cooler honey?"

"What's happening out there?"

"I'll teach her to move in on my boyfriend."

"I can take care of things myself."

"Now let's get you guys home." 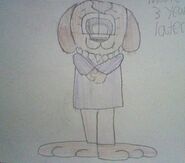 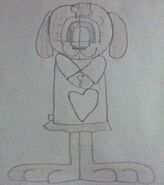 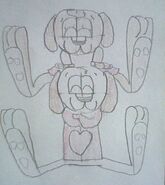 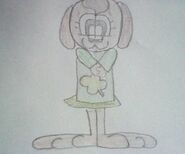 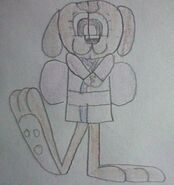 "He's reading the will."

Wheeling in the title

"Whopper! You better change me back now!"

I'm so mad, i could smash Katrina like a potato.

So Katrina was packing us to the fur factory , was she ? Why that woman makes me so mad.

Add a photo to this gallery
Retrieved from "https://poundpuppies1986.fandom.com/wiki/Nose_Marie?oldid=92517"
Community content is available under CC-BY-SA unless otherwise noted.