Marcus is a friend/rival of Howard.

Marcus is a young man who is a few centimeters shorter than TJ. He wears a green uniform with yellow buttons, a red tie, and black shoes. He also has black hair. When he's not wearing his uniform, he casually wears a green sweater, white pants, and blue, fuzzy slippers(Given to him as a present by his wife, Elaine). After three years, Marcus started wearing his cap more often and has a cape to go with his uniform. When he takes his shirt off, he reveals terrible scars from his childhood all over his stomach, shoulders and back.

Marcus is authorative, strict, and tough. Despite that, he does has a kind heart, as he loves his sister and pets very much. He also cares for his friends as well. He forms a special bond for Momo and felt sorry about his troubled past. Marcus is also a fatherly person towards Momo. He even breaks into tears whenever Momo is missing or kidnapped. He also tends to get emotional at weddings, though he tries his best to hide it. Marcus loves jelly beans, but he doesn't like bacon bars. Whenever Marcus is depressed, Momo would do a handstand and Marcus would feel better, saying that "I always feel better because it's always cute when Momo does his little handstand." He also shares a special bond with his new wife, Elaine. He even finds his new blue slippers "much more comfortable to wear than my black shoes.". He hates llamas because they always spit at him. He sometimes calls his friends "soldiers". He also finds Jelly Bean cute because "She's named after my favorite snacks." His favorite song is "Royal March of the Lions" by Camille Saint Saens. Marcus recently developed a rivalry with TJ and Gamma. He is also careful about his actions and constantly thinks that Igor, Vigor, and Bigor hate his guts. Marcus also regrets his childhood. Marcus sometimes affectionately calls Momo "My Puppy" or "My Boy". He eventually learned to be more gentle and friendly to his friends. However, even after the death of his father, he has yet to move on from his nightmarish childhood. He also has no tolerance for bad jokes. Marcus speaks in a Southern accent.

Marcus is skilled with martial arts and uses his baton to fend off his enemies. He is also commander of his "army". He is also a good violin player. Since he joined the puppy pound, Marcus is gifted with Puppy Power. He also carries a machete.

Marcus is a fan-made character created by Rigsrigsrigs10918.

His behaviorism is inspired by R. Lee Ermey, who is known for his role as Sergeant Hartman from Full Metal Jacket and as the voice of Sarge in the Toy Story Trilogy.

His full name is Marcus McGillicuddy.

His "army" was eventually disbanded after Marcus married Elaine. 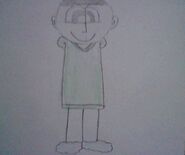 Marcus in his casual clothes

Marcus and Momo at breakfast time 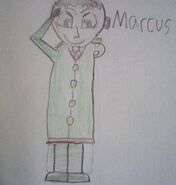 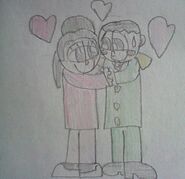 Marcus and his wife, Elaine 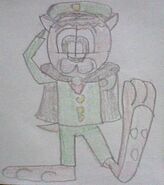 Marcus as a dog

Add a photo to this gallery
Retrieved from "https://poundpuppies1986.fandom.com/wiki/Marcus?oldid=91343"
Community content is available under CC-BY-SA unless otherwise noted.