Captain Canine is a superhero who is best friends with Gordon.

Captain Canine is a retriever with tan fur, tan ears and a bushy tail. He wears a red shirt with the letter C, black pants with a belt, a yellow cape, and a red helmet with a blue eyeshield. After three years, Captain Canine started wearing bandages on his ankles and wrists. His casual attire consists of a red sleeveless shirt, black shorts and a yellow baseball cap. He is the same height as Holly.

Strangely, the Captain speaks with a dull, nasally voice that becomes slightly rough when he yells.

Captain Canine is a fan-made character created by Rigsrigsrigs10918.

Even though Captain Canine doesn't speak in an Austrailian accent, he and his sister were born in Melbourne, Austrailia and grew up in Poundsville. 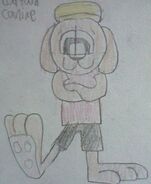 Captain Canine and his sister, Judy

Captain Canine three years ago
Add a photo to this gallery
Retrieved from "https://poundpuppies1986.fandom.com/wiki/Captain_Canine?oldid=90861"
Community content is available under CC-BY-SA unless otherwise noted.