Amy is another inventor who is a new member of the Pound Puppies.

Amy is a pug with light brown fur. She wears glasses, green gloves, an orange shirt and an orange skirt. Amy has long, brown hair. After three years, Amy started wearing an orange jumpsuit with a pink flower design and white fingerless gloves.

Amy is very intelligent and will not tolerate malfunctions in the machines she makes though she is a very patient pug. She sees Howler as a good friend and often helps him out. Amy and Howler are boyfriend and girlfriend. She is also fond of their assistant Dexter and she is much more patient with his clumsiness than Howler. Amy even calls Dexter's name cute. Despite the fact that Amy is smarter than Dumbo, she doesn't mind Dumbo's stupidity and finds him funny.

Like Howler, Amy has a knack at inventions. She can also play the violin when she accompanies Howler in a duet.

Amy is a fan-made character created by Rigsrigsrigs10918 and CartoonLover.

She hails from Boston, Massachusetts. 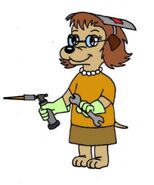 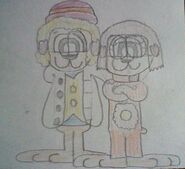 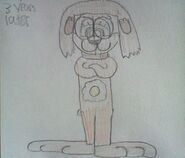 Add a photo to this gallery
Retrieved from "https://poundpuppies1986.fandom.com/wiki/Amy?oldid=91551"
Community content is available under CC-BY-SA unless otherwise noted.